If the Bear Pen Trail is any indication of the current condition of the rest of the trails at Watoga State Park then the trail volunteers are in for a big clean-up task.  Cleaning large branches and trees off the section of the trail from the trailhead to just the junction of Buck and Doe took nearly 2 hours.  Praise be the person who invented the z-rig.   Family Reunion Central.

Last week’s “Watoga- Where Is It ?” photograph of the memorial plaque at the T.M. Cheek overlook has a backstory.  And I will share it with you.

Char Weise has a long family history at Watoga State Park dating back to
his great grandfather who lived in Renick, WV.  Great Grandfather Weise started a grand tradition of annual family reunions at Watoga.  These family gatherings continue to this very day as the family has grown through many generations.  At one such reunion some years back they filled every cabin in the park.

Here is how Mr. Weise recounts how that familiar landmark came to rest at the T.M. Cheek overlook:

“Our family has been coming to Watoga every year for the Spencer family reunion since 1963.  From the late 1960’s at least, our family usually spent the week in Cabin 21.  The trail up to TM Cheek from Cabin 21, which was then called the Honeymoon trail, was my parents’ favorite walk.  They’d often go up there early in the morning while my brothers and sisters and I were still asleep and look at the view from the overlook.  It was still their favorite walk in their later years.  My Mom died in 1995 and my Dad in 1997.

We asked for the plaque to be installed around 2005.  The superintendent, Mark Wylie, told us that there was an interest in reintroducing American chestnuts, which had been wiped out in a blight many years ago, to the park.  We thought planting some chestnuts at that spot would be a fitting tribute to our dad, who was a biologist with a great interest in conservation.  Now every year when we come to Watoga, my siblings and I and our spouses and kids make sure to hike to TM Cheek in the morning, up the trail that our parents loved, to think about them and pay our respects.” 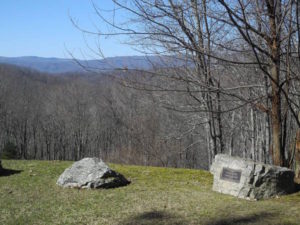 Thanks to Char Weise and John and Margy Goodwin for this bit of history about a park that just seems to bring forth such wonderful memories.  Let us hope that many more generations will be able to experience the joy and beauty of being in West Virginia’s largest and best park. 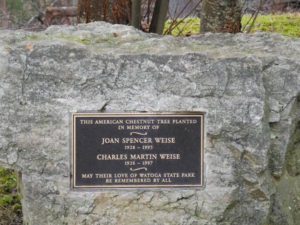 The American Chestnut Foundation and the American Chestnut Research and Restoration Project have made great strides in developing a blight resistant chestnut.   Furthermore, they have the same qualities of the original tree through breeding and transgenic programs.

Learn More About the Return of the American Chestnut

This is the scene this morning at Mile Marker 44 on the Greenbrier River Trail. Two rockslides have partially blocked the trail. Caution should be exercised when passing this section of trail, particularly when raining. There are some huge rocks on the slope that are hanging on by a thread; it is a contest now between gravity and very tenuous holds on the slope. And of course, gravity will win. Rock Slides and Remembrance of Forest Primeval. 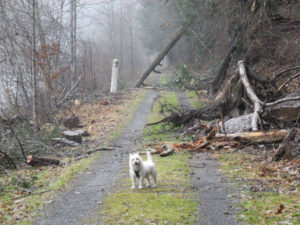 I have noticed on this rockslide, as in previous ones, that large dead hemlocks tumble over bringing up their root ball with them starting a cascade of rock down and on to the trail. Erosion as a result of heavy rain only exacerbates the problem. This is an area with frequent problems.

Well, Senate Bill 270 by all accounts is now dead. So at least for the moment Watoga will be spared from the plans to log her. Many of you expressed your opposition to this ill-conceived idea. Your comments were genuine and moving and you are to be commended for expressing your love for Watoga State Park.

Brian Hirt, a fan and frequent visitor to Watoga, expressed in this modification of a song by Gordon Lightfoot his sentiments about the need to preserve and protect all that is in, and within, Watoga State Park for all generations to come.

In reading his lyrics I can only request that he pick up his guitar and share it with the rest of us in song at his first opportunity.

But time has no beginnings and history has no bounds. And to this verdant country they came from all around. They floated logs upon her waterways and timbered the forest’s tall, built the mines and the mills and the factories for the good of us all.
But then they looked back at the mountains and what did they see a barren landscape without any trees, with rivers overflowing with silt looking like a wasteland if you please.

Their minds were overflowing of the visions of their day but thankfully some looked into the future and saw places like Watoga so that today we too can walk in the green dark forests tall and imagine a time when the wild majestic mountains stood alone against the sun long before the white man and long before the wheel and when the railroads did not run.

Happy Hiking, at Watoga of course !

A nice loop trail from the Pine Run Cabin area is starting on either Pine Run Trail (Cabin 28) or TM Cheek Trail (Cabin 21).  The loop is sewn together with a short section of the Honeymoon Trail and TM Cheek Road.  An added plus to this moderately strenuous hike is passing the TM Cheek overlook.  Since it is approximately the halfway point, it is a good spot to sit on the bench and take in the great view for a bit.  Today was hiking with canine companions.

My canine associates and I cleaned up this loop hike today.  We left behind a few larger trees to be cut with a chainsaw in the near future.  These obstacles were delimbed and are easily negotiated.

I want to introduce you to one of my two trail maintenance assistants, Mr. Bongo T. Bones.  Bongo came to me by way of a dog rescue group in Missouri who, in turn, got him from a breeder.  Bongo had the misfortune of being born with an under-bite.  Breeders do not often tolerate any physical irregularities; sometimes destroying such dogs when they are puppies.  I personally love his slight imperfection. I think it gives him a unique look matching his enthusiastic personality.  He is always ready for fun or work. 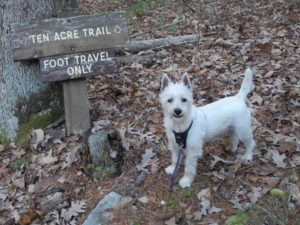 Bongo is a West Highland White Terrier, a breed originating in the Scottish Highlands.  So our West Virginia mountains are a perfect home for this breed.  Westie’s as they are called are smart, friendly and seem to know that we are out in the woods to perform a task.  When I stop on the trail to remove an obstacle they sit off to one side and patiently wait.  Then I give the order to “go trail ” and we resume our hike.  They absolutely could not be better companions.  And they never, ever, complain. Hiking with canine companions.

Now meet Mr. Mossy Log………  No, I will save that for another day. 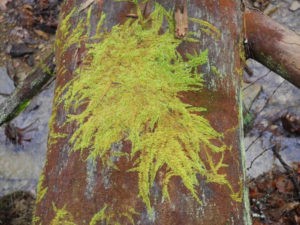