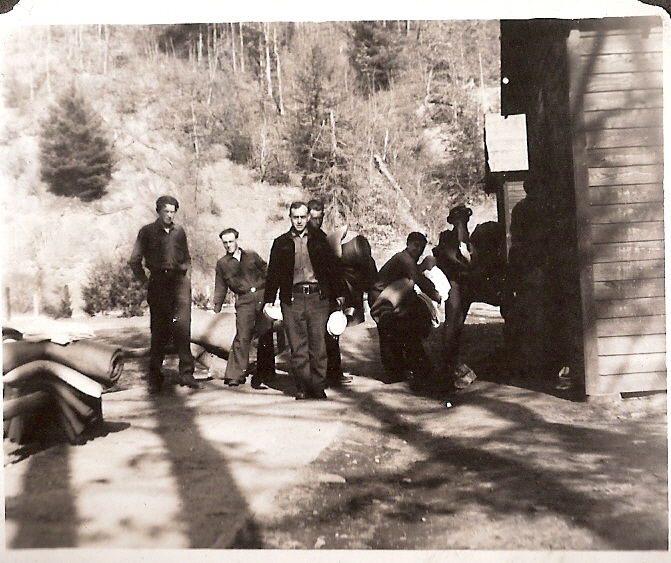 Watoga State Park is among the oldest of West Virginia state parks, dating back to the first land acquisitions by the West Virginia Game and Fish Commission in the 1920s. The park is located in southern Pocahontas County on the Greenbrier River. It was named for Watoga, a nearby town, whose name comes from the Cherokee word for “starry waters.” An initial 4,546 acres of former lumber company land was purchased from Watoga Land Association in January 1925 to create Watoga State Forest. The state purchased an additional 5,107 acres in August 1934 from the Maryland Lumber Company. [1]  The land that forms the nucleus of Watoga was originally acquired in January 1925, when the park was planned to be a state forest designated as a wildlife and timber preserve. In May 1934, a decision was made to instead develop the site as a state park. Much of the development on the site was done by the Civilian Conservation Corps (CCC).  Between 1933 and 1935 three CCC camps were established at Watoga, Camp Watoga, Camp Seebert, and Camp Will Rogers, and provided the labor to build the park.

The park was first opened on July 1, 1937. CCC laborers “had built an administration building, eighteen cabins, a superintendent’s residence, a dam, which turned Island Lick Run into an eleven-acre lake. Four additional cabins followed the next year. According to Where People and Nature Meet: A History of the West Virginia State Parks (1988), “older dwellings in the vicinity were visited and studied as to the design of fixtures and furnishings, and available scrap iron was fashioned into hinges, door latches and fireplace implements in careful duplication of pioneer design.” Wood was salvaged from chestnut trees that had been killed by the blight but were still sound, and lumber was milled in the park. Watoga’s cabins, numbered and easily seen from roads and trails, display great variety within the generic rustic context.

Cabins 5 and 14, essentially twins, are the most complex in plan and material, containing log, stone, and clapboard in their makeup. Most of the others are log with exaggeratedly rustic details. One of them has been converted to a CCC museum. The administration building, an impressive two-story log-and-shingle building, still serves its original purpose. The swimming pool, begun in 1939 and completed the next year, was Watoga’s last major CCC project.” [2]

Development of the park stopped during WWII, but after the war, work on the park resumed, and the first camping area opened in 1953, and eight deluxe cabins opened in 1956. Recreational use of the park increased during the 60s and 70s, requiring the addition of another camping area. Today, the park is supported by the Watoga State Park Foundation which promotes the recreation, conservation, ecology, history, and natural resources of the park.

The New Deal Resources in Watoga State Park Historic District is a national historic district encompassing 59 contributing buildings, 35 contributing structures, 2 contributing sites, and 11 contributing objects. They include water fountains; trails; a swimming pool; a reservoir; rental cabins; and picnic shelters; as well as a former CCC camp. The park is the site of the Fred E. Brooks Memorial Arboretum, a 400-acre arbor 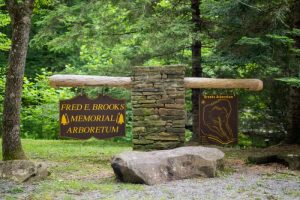 etum that encompasses the drainage of Two Mile Run. Named in honor of Fred E. Brooks, a noted West Virginia naturalist who died in 1933, the Arboretum’s construction began about 1935 and a dedication was held in 1938.

Located in the mountains of Pocahontas County, Watoga State Park is West Virginia’s largest state park. With 10,100 acres of land, Watoga is filled with many recreational activities including hiking, swimming, fishing and boating. Watoga Lake is 11 acres and good for boat fishing or a short paddle. Known for excellent fishing opportunities, the lake is part of the Division of Natural Resources’ stocking program. A multipurpose building, museum and observation tower are just a few of the unique attractions at Watoga State Park.

It was listed on the National Register of Historic Places in 2010.