Happy New Year to all the folks in the Watoga State Park Foundation, all the trail volunteers, employees of Watoga State Park and those who love and visit Watoga State Park.  I have long since quit making resolutions.  But my New Year plans are to continue getting out on those Watoga trails every chance I get in 2018.  For that I will be immensely grateful !  Today’s article is about hoarfrost.

Today I had much appreciated help from the “other mountain state”, Colorado. The following trails are clear for hiking.  In fact tracks in the snow reveal recent use.  Jesse’s Cove Trail, Arrowhead Trail, Bear Pen Run Trail, Lake Trail and Recreation Trail.

We encountered a real treat early this morning on Bear Pen Run Trail in the form of ” Hoarfrost “.  An English dictionary from the 1920s describes hoarfrost as ” expressing the resemblance of white feathers of frost to an old man’s beard”.  A more recent dictionary defines this delightful cold weather phenomenon as ” a white crystalline deposit of frozen water vapor formed in clear still weather on vegetation, fences, etc.”

To delve a bit deeper into the formation of hoarfrost we need to look at the necessary environmental conditions. To produce any form of frost you need water in the form of a gaseous vapor and it must be suspended in the air over the ground that is at a temperature no greater than 32 degree F.  Today’s temperature clearly met that requirement.

When these water vapor molecules come in contact with a subfreezing surface, such as a pine needle, they jump directly from a gas state to a solid state. This process, known as “deposition”, leaves a coating of tiny ice crystals that sometimes develop into these beautiful feathery forms as you see in the pictures. 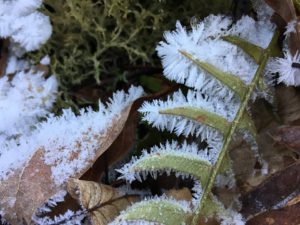 Now a word of advice to those who attempt to photograph these ephemeral sculptures.  If you are being accompanied by a creature of the canine persuasion you would be wise to tie that critter off.  While conducting your photography session, they seem to be drawn directly to the object of your attention. This often results in a paw coming directly down on your specimen of hoarfrost before the shutter is released. Believe me, I speak from experience.